Kanpur-The journey of a lifetime

Finally giving words to one of the best travel experience of my life till date.
This post is more of a collection of few of my memories of the great trip.

November 2011, the semester about to end. I was gearing up for semester end, Aravind registers me up for the tech Fest held by IIT kanpur.
The fest was to be held during end of January, but we started working our asses off right from December i guess.We almost worked 15-18 hrs a day, sometimes working all night[Though it was me who worked all night, and aravind just dozed after 12AM].

We left Bangalore a few days in advance, some 4 days before the event was to start. We went by train!Hell yeah it was one amazing journey. 36 hrs of pure entertainment!I think it was the time everyone made maximum use of the GPS facility provided by our Mobile phones. Fortunately(though we called it unfortunate back then) our train would go only till Jhansi, after that we were on our own.

Night One:
We left around 9 PM, Rajadhani express, After the free dinner served in the train and the initial excitement had settled down, Aravind and Ganesh shared one birth,Mike was lost in his world messaging away to glory.Being a person who hates slumber during a journey, all i could do was sit and maybe dream:P
while the rest of them dozed off. Kishan was up for a while but he too couldn’t resist sleeping.

Next day: Mornings in the train are quite unique, you have just 2 toilets and everyone wants to go :P
Well, once the toilet crisis and breakfast was done, we were pretty much jobless, watched a few movies, stood at the door feeling the wind, walked about the train, had some Nagpur oranges. well that was pretty much it on the train that day. 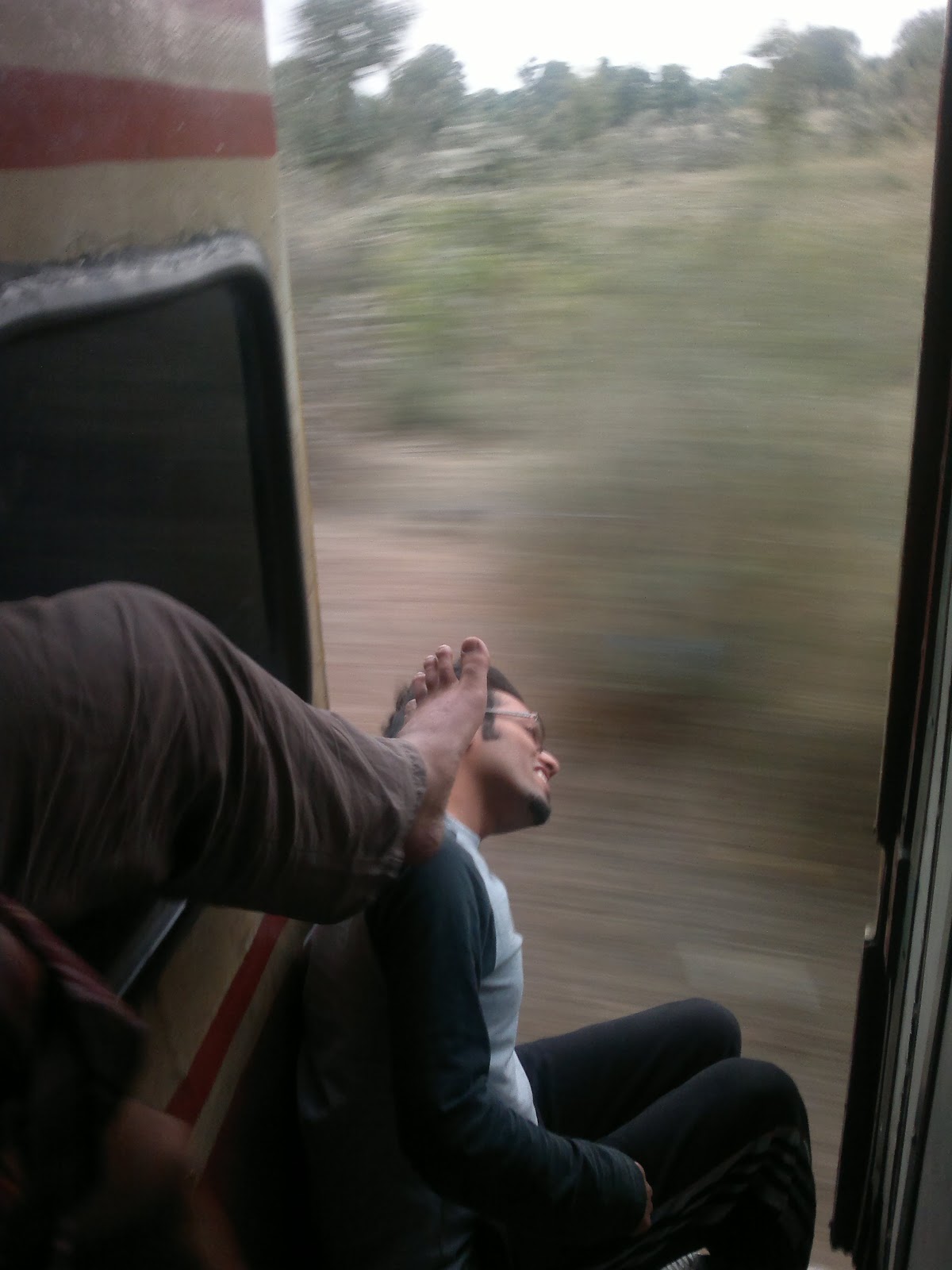 We were due reaching Jhansi that night, so after our dinner we were glued to GPS tracking our position. As usual Ganesha was busy asleep, Mike and Ojas were busy messaging, Kishan was with his music.

We got off at Jhansi at 2 in the night, It was cold, People formed small groups and were having a smoke to keep them warm. Many of them wrapped them selves in blankets. Here we stood, With just our Usual normal bangaloored styled cloths shivering a bit.With no idea how to proceed from here to kanpur at this time, Ganesh and Ojas wend around enquiring, well I had one cup hot coffee-BRILLIANT!!!

After some questioning and being tried to cheated, there were two train we could take, both with the difference of 30 minutes, The first one was crowded, people were hanging on each other. The other, Well was to start from Jhansi itself. but it took 2 hours more than the first train. With no option left, We took the empty train, A really dirty, quite stinky, dark train, getting ourselves seated on metal and wood which were cold enuf to get our asses numb in a dimly lit boogie, we waited for the train to start. 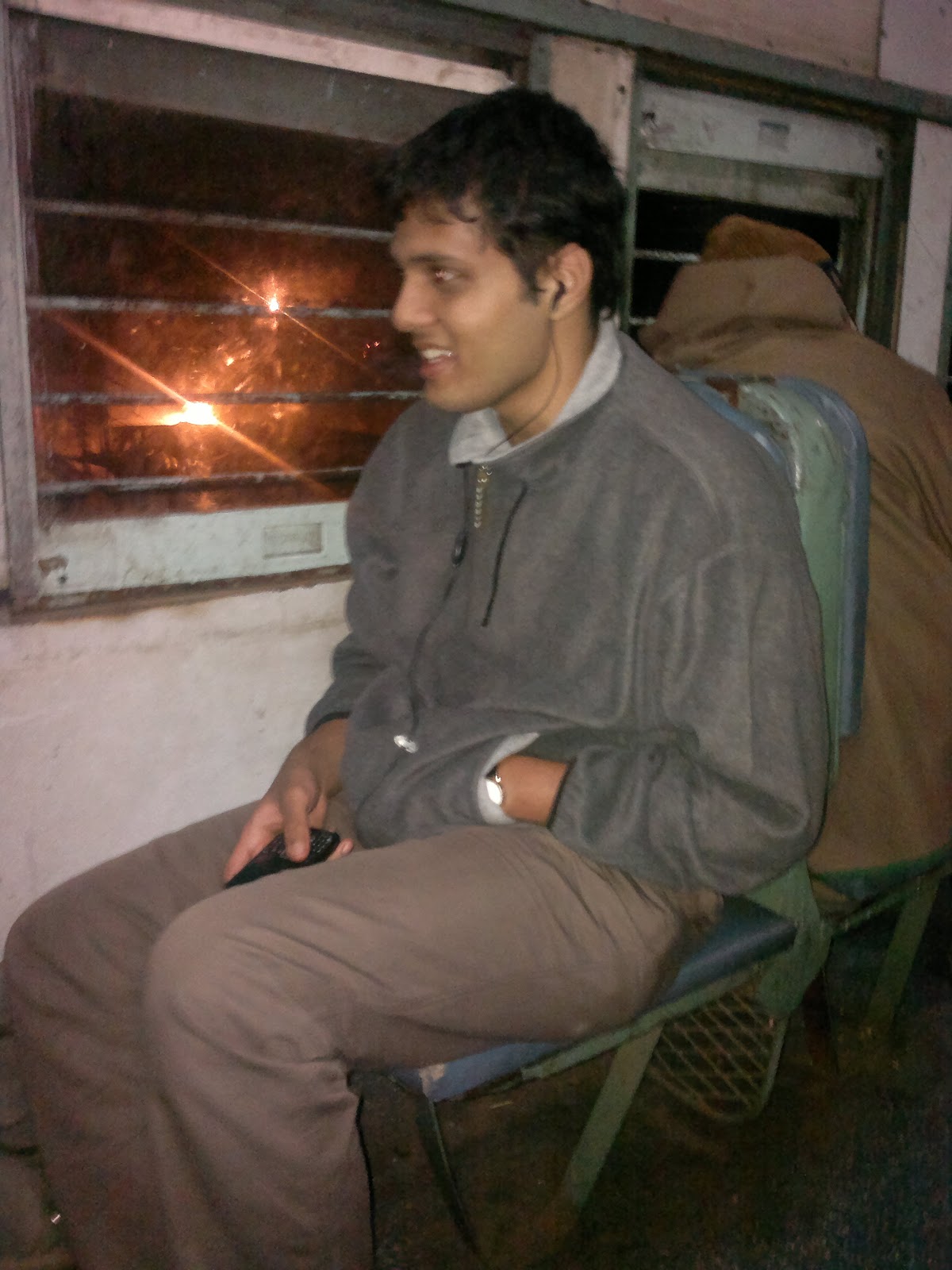 The train started moving at 3AM, it would move for about 15 minutes and halt for atleast 20 minutes. Everyone other than me were in a state of semi-slumber.

Once the sun was up, we would take chances, sitting near the window to warm ourselves up a little.
The part of this ride, that made it worth, just lasted a few moments. I think the picture will express much more than Wat i can.

Finally we reached Kanpur at 9 AM, With a sigh of relief getting off that train. Walked out of the massive railway station, designed along the lines of Islamic-Indian Architecture. A bunch of rickshaw drives waited outside to pester us, few of them attempted to cheat us, luckily finding our way out we found ourselves a decent lodge, had lunch,and I do not know what happened after that for the next few hours. I went into the deepest slumber, On waking up, it took me atleast 10 minutes to realise where I was and what was going on.(The room was converted into a semi-lab :P ).

Once in our small little cave, we set up our work and it was time to eat! So there we went again hunting for a place to eat. No grand hotels there, but we found some small place with excellent food. All the various kinds of parathas and the paneer and what not!   Got back to our small little work place and worked. (I was still blank, Dono what I was doing)

It was dinner time, I had got my senses back by then. We went out again, this time we went farther away in search of a hotel. ate something decent(Parathas again) on our way back was a sweet feast!! Stopped at a sweet shop and tasted every possible sweet which looked good!!(rabdi+Rasmalai+sandwich halwa+…+..)

Form this point on I do not remember the exact sequence of events! its too hazy in my head. but yes, I do remember all the events!

Next day: We moved closer to the IIT campus, To a hotel where we were cheated. Expensive hotel, we had food there only once, and it sucked. The Dhaba next door was much better.

Anyway, after relaxing ourselves and etc etc…the next day we took the 2re auto to the IIT campus, One hell of a huge campus! Got ourselves registered and took a stroll around the campus.

The next day was our event I guess, which dint go that well, actually went horrible! that was it, we were now free from all work. From that day on, we loafed about the campus, ate ate and ate :P

That evening was a talk by RMS on creative commons, followed by some pizzas and a long walk back to the hotel room at 12 in the night!

The following day was very much similar, but had its own adventures in store for us. Most of the morning was spent loafing around the IIT campus, We went around to the far ends of the campus, the observatory, The air fields etc….

The fun started in the evening. Ojas smuggled some rabdi into the theatre where we saw some magic with shadows, When he was frisked people thought he had a plastic ASS :P

After the show we went out grabbed some food,  then we cycled(I took the back seat) to the astronomy club, where they were sky gazing at 1 in the night. The misty night, our finger numb, sweaters barely keeping us warm, we finally reached met the sky gazers group. looked up into the sky, it was bliss! Peaceful ,serene, beautiful! few of the images still fresh in my head, one of them was Saturn! We saw Saturn, a tiny little dot on a dark canvas, with its rings giving it a unique distinction from all the other heavenly bodies we saw that day. Such beauty, maybe will never be seen by me ever again.(I’m hoping not). Coming back to the central area, took some time for us to get over what we had just seen, ate some rabdi, took a long stroll back to our room, walking down those misty roads, talking about my favourite topic(more of introspection, it was) we finally hit the bed in a jab packed room with 25 others, I guess.

The next morning, we planned to attend the rubix cube workshop, but were late to register.Later we went around there was a photo-exhibition, quite impressive i must say.
That evening was the concert by Kailash kher, In order to get some decent place we stood in the line quite early, finally got into the area and well i was bored after 10 minutes, The sound was terribly load, the crowd not my kind :P
So aravind and i, left the venue, took a stroll, a nice misty night, some kool songs playing in the background. We came across this building exactly opposite to the place were the concert was taking place, And this building was acting as the reflecting point for the sound, causing an echo. Climbing up to the 9th floor, we could see the concert, the sound was perfect, the weather amazing and not to forget the moon ;) quite the perfect setting. (jst the wrong person :P Watta waste)

This was followed by an excellent plate of hot kanpur special tandoori chicken! [Ah those days]

Well this was it, next day was good bye kanpur, Going back to the railway station, we left the luggage in the cloak room, went around the city, did some shopping, took a cycle rickshaw (much against my will). Then back to the station, saying goodbye to kanpur.


One of the best journeys came to an end this way, A lot was learnt on this journey.. It has become the foundation to what i have become and things I have been doing for quite a while now.

This blog may be the most boring and pointless of all blogs till date, for you as the reader. It is written more for me than for the reader, to help me relive few of the best memories i have. Many of these memories go beyond the visibility of this blog, which have shaped me to who i am today.

To the person I met on the train, I do not know your name, If by chance you read this, You should know, we have done more that what you over heard that day, Thank you for the insight.

← prev next →
comments powered by Disqus